Travelling to El Hierro, you reach the westernmost part of the Canary archipelago and at the same time the smallest island. Hardly more than a rock in the immense waters of the Atlantic, if you don’t pay it much attention. But a true paradise for your next El Hierro walking holidays. Hiking is a great way to explore the area, but there are so many options here, so many variations of El Hierro, that this activity is just one of many.

Our Hiking in El Hierro holidays

We offer you from 5-day getaways to several islands trips, to discover and enjoy El Hierro walking holidays, on foot.

695 €
The ESSENTIAL programme is the perfect way to take a tour of El Hierro's most iconic hiking landmarks. Over the course of a week you will discover the hiking essentials…
5 days - INDEPENDENT hiking trip 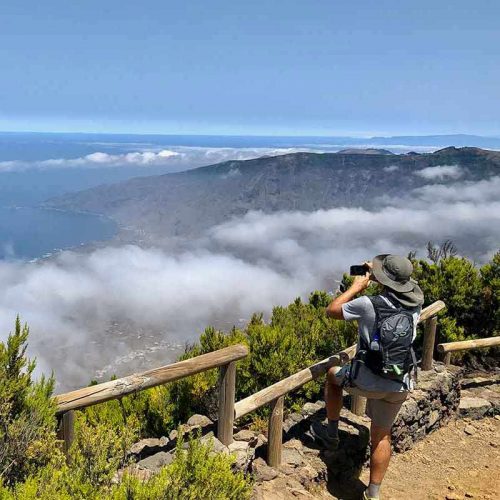 398 €
The GR131 of El Hierro is a route that reproduces the mythical Camino de La Virgen de Los Reyes. A procession that the locals repeat every four years, carrying the…
5 days - INDEPENDENT hiking trip 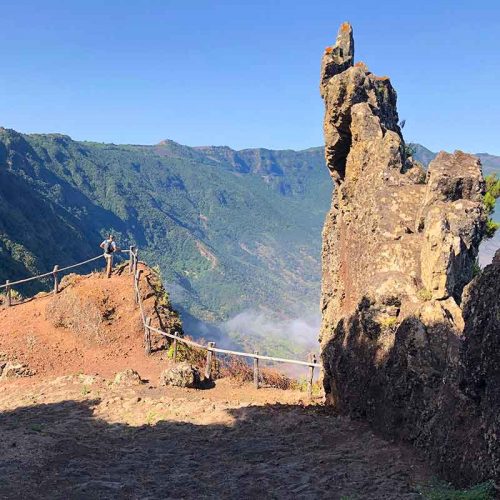 395 €
The SMART programme is the perfect way to cover El Hierro's most iconic hiking spots in just a few days. You will discover the essence of El Hierro in terms…
8 Days-Independent Hiking-2 islas 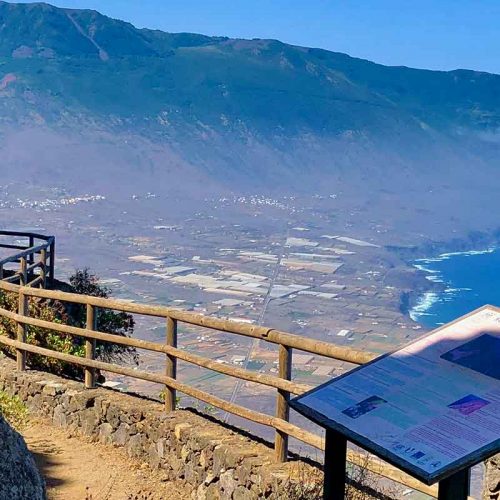 835 €
Walk over the 2 islands of the Canary Islands. Discover Tenerife and walk through the fascinating landscape of the Cañadas and in the mountains of Anaga. Discover on the small…
Load more...

Our escorted WALKING PROGRAMMES in a group: find the perfect accommodation for your next El Hierro walking holidays

Less than 50 kilometres separate one end from the other, but they will contain something once they have been declared a biosphere reserve by UNESCO. Within such a short distance, you’ll find surprisingly dense forests, natural pools and coasts with crystal-clear waters perfect for diving and other water sports.

The coastline could not be more diverse in its almost 100 kilometres. From the steepest cliffs to the calmest and most accessible coves and lagoons. The entire Canary Islands seascape, reduced to its minimal expression, condensed and sublimated in El Hierro’s many beaches.

Like the rest of the Canary Islands, El Hierro (the island with soul, as it is also called, the island of tranquillity) has a mild and peaceful climate all year round, so a visit is not dependent on a particular time in the calendar and is possible at any time. You don’t have to worry about overcrowding either. You can definetly discover all in your next El Hierro walking holidays

It is no easy task to select some of the great successes of El Hierro’s natural spaces, but here are some of them. Some of the most spectacular, beautiful and legendary places

The La Peña viewpoint offers an impressive view of the island’s geological history. From a height of 650 metres, visitors can admire the great depression of El Golfo, formed by volcanic activity some 100,000 years ago.

The Dehesa forest, shaped by the trade winds, is a magical and surreal place where the junipers have taken on impossible shapes over time.

Like so many other formations in the Canary Islands, it is of volcanic origin and emerges from the water with a capricious shape that hides some underwater secrets. Among other things, the flora and fauna that live around it.

The Cave of Don Justo is just one of the volcanic tubes that run through El Hierro. From here you can access a network of tunnels more than 6,500 metres long.

Since its creation in 1996, the Mar de las Calmas Marine Reserve has been home to the largest and richest marine ecosystem on the island. Among them are cetaceans such as beaked whales, those great unknown species.

This cliff is located at the northernmost tip of El Golfo and its walls show the geological evolution of the area over thousands of years. Something like the rings of tree trunks.

According to tradition, at the time of the Bimbache there was no other drinking water on the island than that which flowed from this tree. It is still honoured today by its representation in the coat of arms of El Hierro. 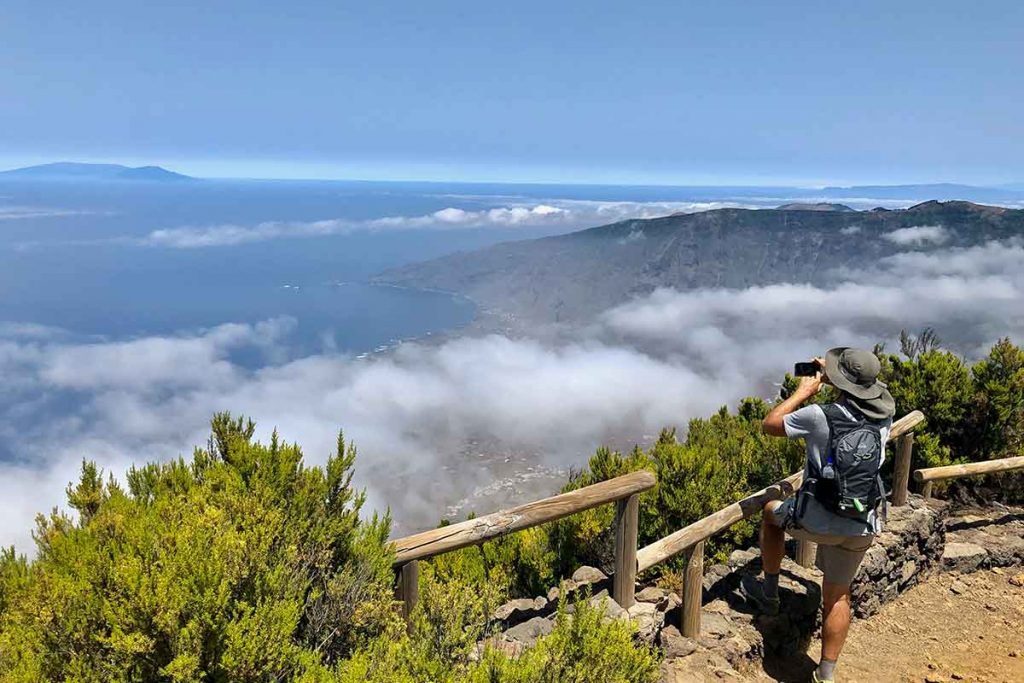 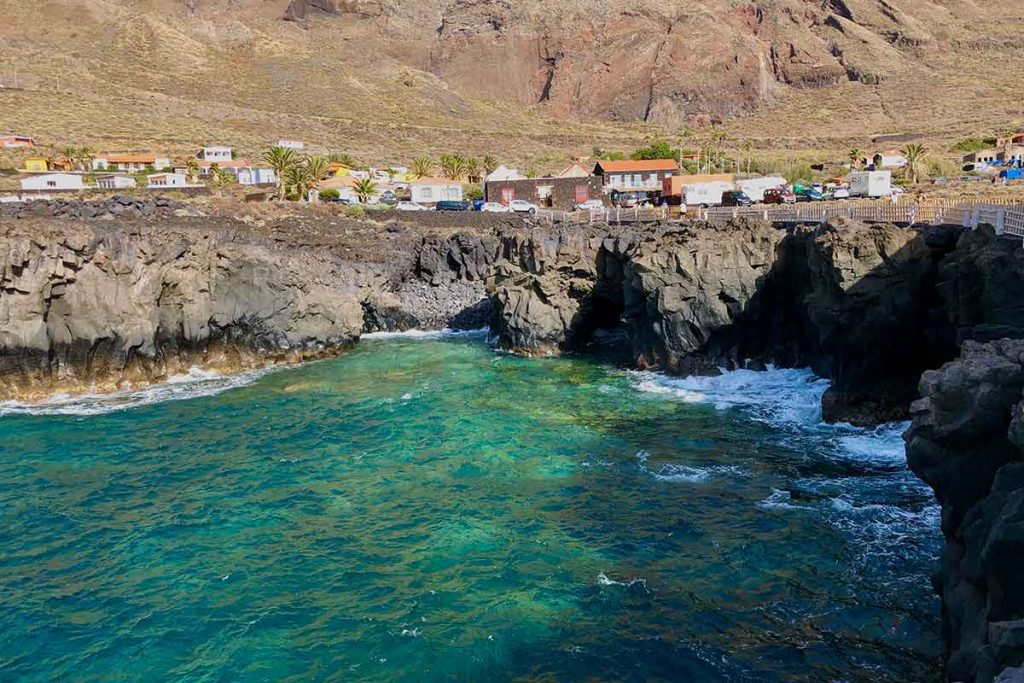 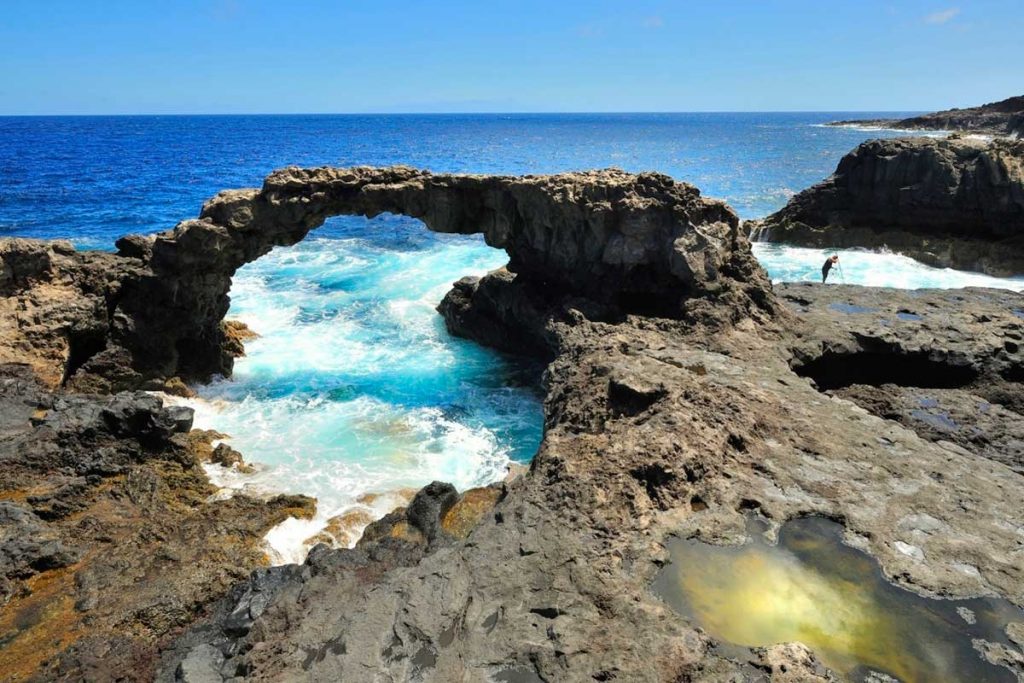 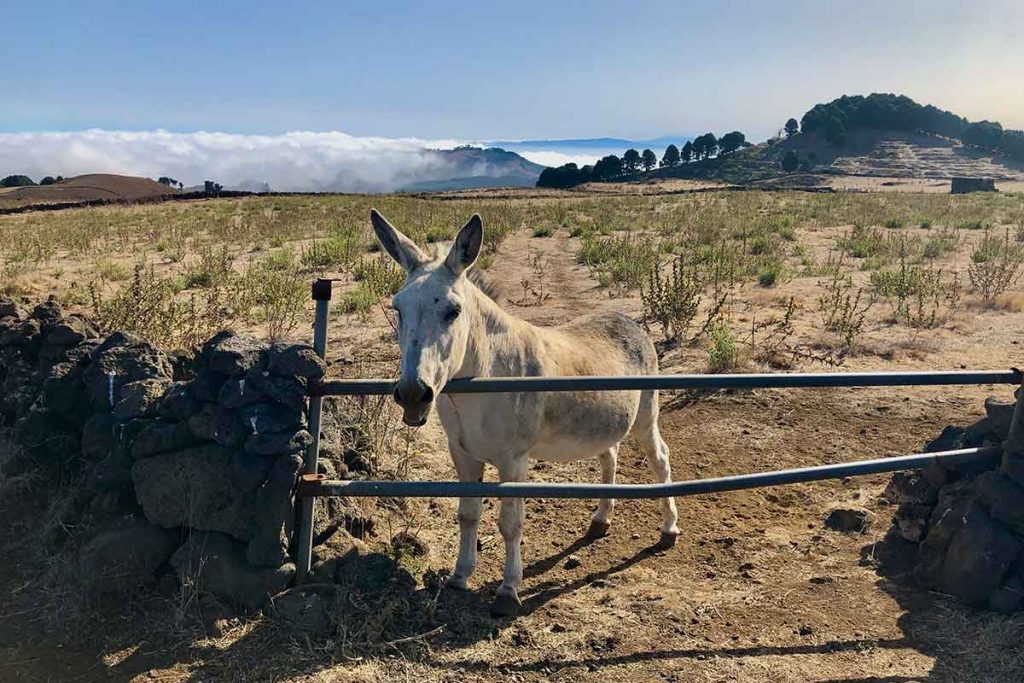 What can you do on El Hierro? What not to do in El Hierro. Take a tour by car, bike or on foot, let yourself be carried away by the trade winds while paragliding, admire the contrasts of the landscape, taste a Herreño wine accompanied by fresh fish and quesadillas. The island is not easy to leave.

Its offer is as extensive as the accommodation options. It depends on your plans, your budget and your individual interests. There are many flats by the sea, but also holiday homes, country houses and the so-called emblematic houses, which are located away from the tourist centres and are part of the historic centre of El Hierro.

Not to mention the diving sites, which, with a water temperature that does not exceed 25ºC and does not drop below 18ºC all year round, and underwater visibility of up to 50 metres, cover the entire area and allow the observation of an enormous number of species of all kinds.

And the sights to see, such as the El Hierro Giant Lizard Sanctuary, the Cruz de los Navegantes (long considered the most westerly point in the world), the Monument to the Prime Meridian (which is an exact reminder of the time when the island was the Prime Meridian), the El Julan Cultural Park with its Bimbache petroglyphs, or the Pozo de la Salud Spa, which has been a public utility since 1949.

Naturally, the island’s cultural and gastronomic offer is also very diverse, just like its landscapes.

In addition to fish, harvested in a traditional and protected way, and wines with designation of origin, the island’s culinary tradition includes all kinds of meat, with rabbit and kid standing out (not least because they are less common on the mainland). They are served with mojo rojo and potatoes.

El Hierro is the only island in the Canaries to have preserved the archipelago’s traditional tree model, the tagoror, a round or elliptical building surrounded by a stone wall with an entrance. The term comes from the Berber language and means “meeting place”, for which it was already used in the time of the island’s indigenous people.

The numerous petroglyphs scattered all over the island are from ancient Berber peoples, as are the origins of the craft practices and other folkloric performances that are still very present today and help to make El Hierro what it has always been: a mythical land. 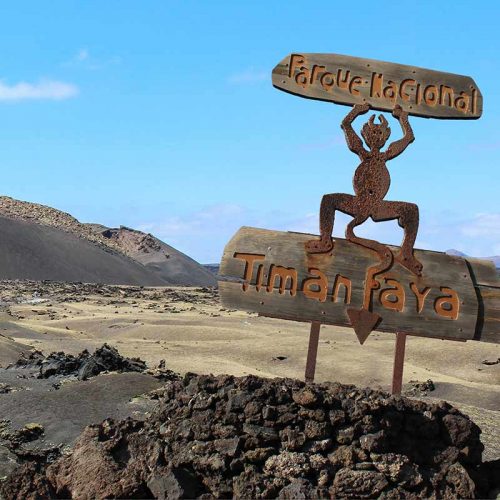 745 €
Discover the essence of the islands Lanzarote and La Graciosa. The Lanzarote ESSENTIAL programme includes the 5 hiking routes and one bike route, plus the boat transfer from Lanzarote to La Graciosa. Experience now the two most special islands of the Canary Islands, walking on your own on the volcanic island and cycling through the smallest island of the archipelago.
8 days
Hiking in Lanzarote 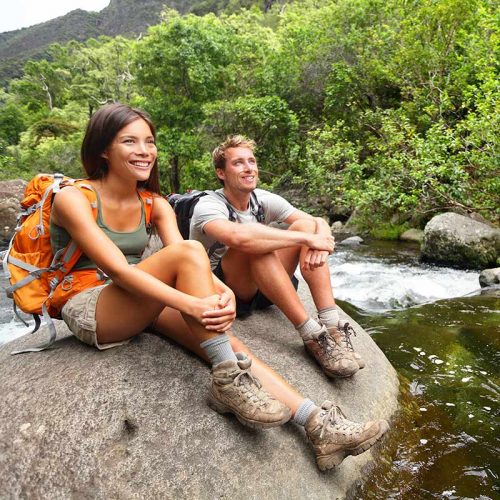 695 €
Experience the magnificent landscapes of La Palma walking independently. 6 splendid routes through the most representative parts of the island. Enjoy an unforgettable experience camping one night in the heart of La Palma in a comfortable HAVEN tent. Discover the magnificent volcanic scenery in the south of the island and see the new cone of the last volcano from above. 6 days of self-guided trekking on the GR 130 and GR 131 will make your experience on La Palma unforgettable.
8 days
Hiking in La Palma 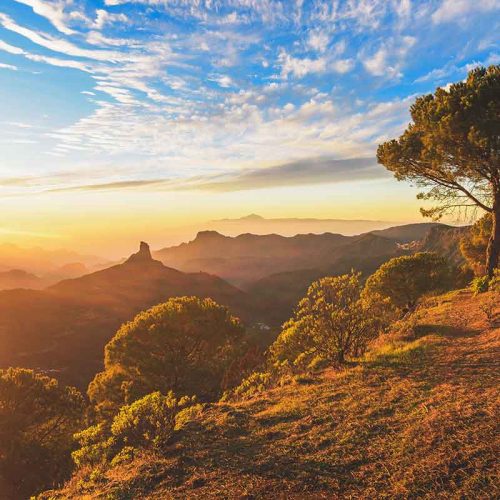 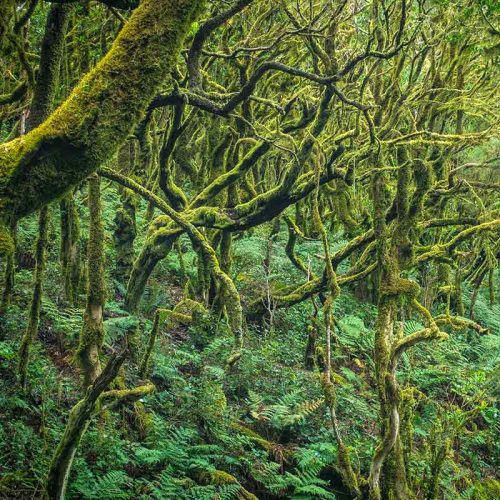 395 €
Walk the 3 most beautiful routes of La Gomera, in a short 5-day getaway. You will walk through one of the best preserved laurel forests in the Canary Islands; you will discover spectacular rocks rising majestically. Let yourself be enchanted by the magical beauty of an island that keeps its nature intact, walking along the best trails of La Gomera.
5 days
Hiking in La Gomera 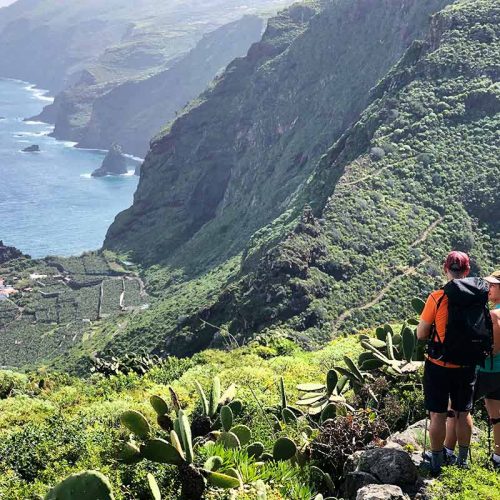 695 €
Surround the lush north of La Palma along the GR130 walking on your own, from point to point. Discover the deep green laurel forests at Los Tilos. Walk through magical landscapes past tiny villages and breathtaking cliffs. Immerse yourself in the spectacular mountain scenery by walking through the GR131 from Roque de Los Muchachos to Pico de La Nieve and also crossing the mythical Volcanoes Route.
8 days
Hiking in La Palma 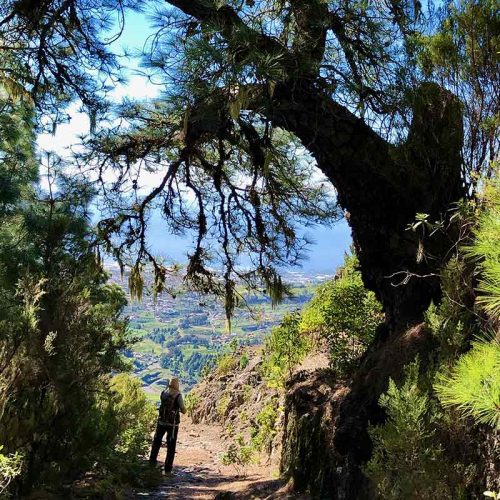 785 €
Without any doubt the Isla Bonita, on the Canary Island, is one of the most beautiful island and a paradise for hikers. We have selected the 6 most special routes so that you can immerse yourself in the enormous diversity of La Palma's landscape on foot. After each route you will enjoy your small charming accommodation and the local atmosphere of Santa Cruz de La Palma.
8 days
Hiking in La Palma 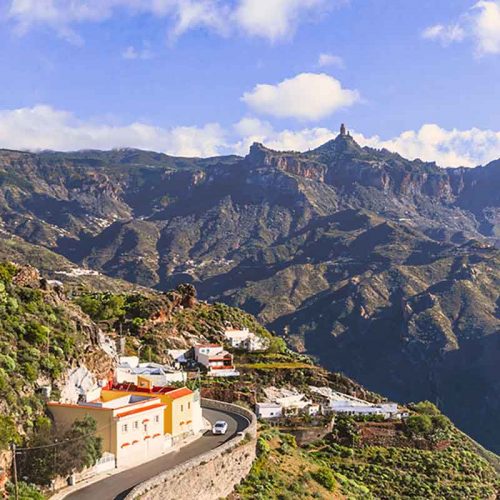 925 €
Live a magical experience on the island of Gran Canaria, walking at your own pace along the most exquisite routes. Discover incredible inland landscapes and stay in charming hotels. Our ESSENTIAL programme offers you 6 carefully selected routes through the most characteristic parts of Gran Canaria, on foot.
8 days
Hiking in Gran Canaria 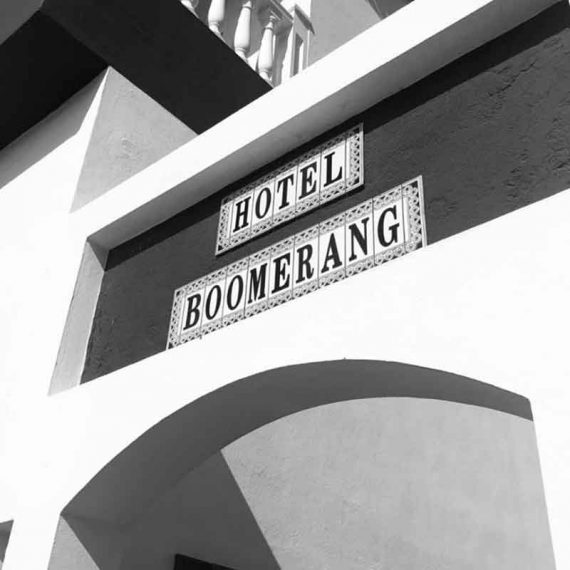 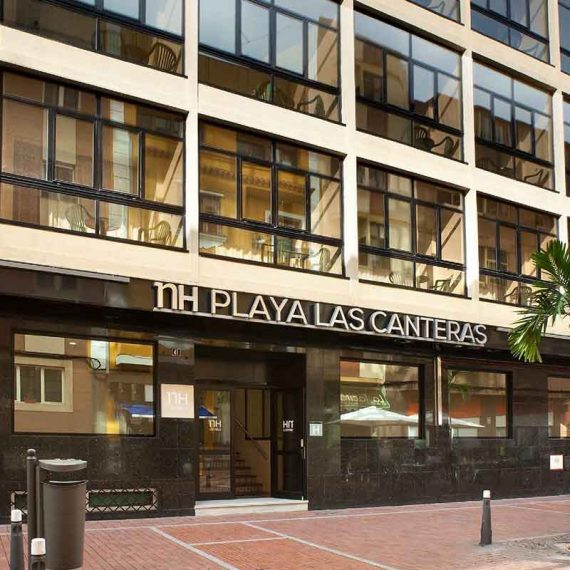 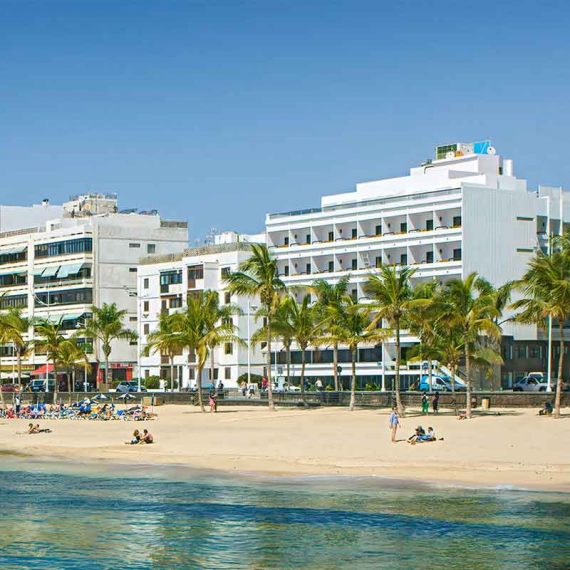 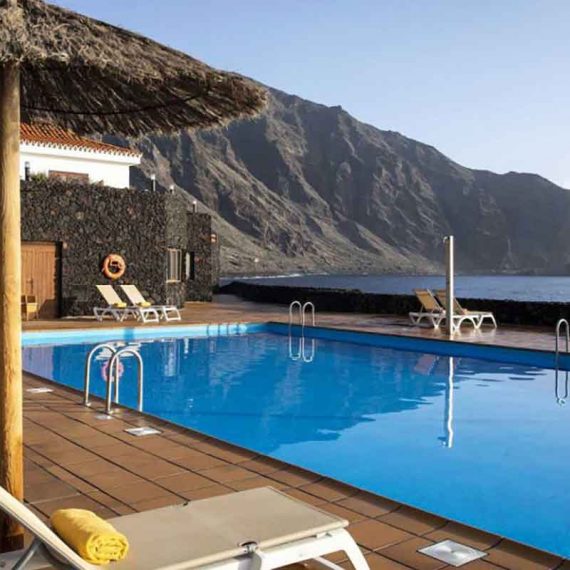 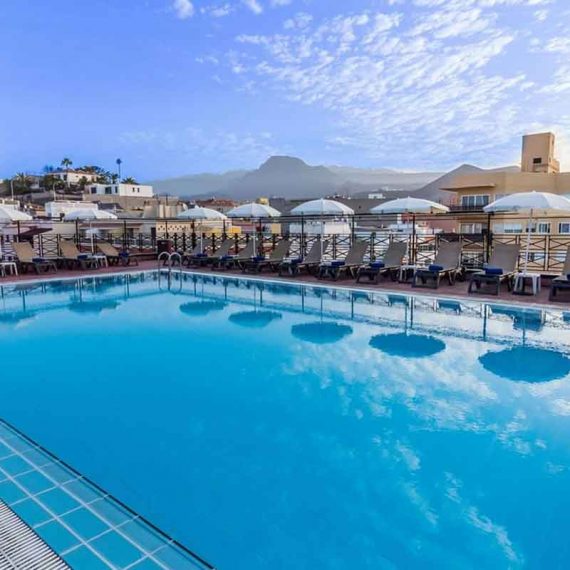 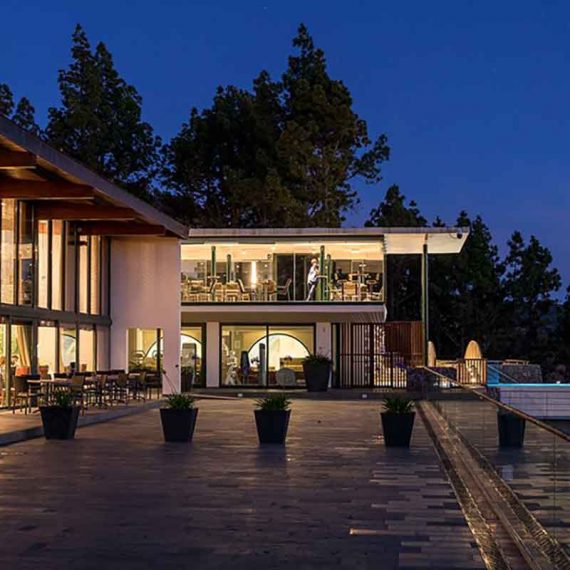