Posted at 17:27h in Hiking tours on La Palma by Natour Travel
0 Likes

There are so many trekking tours on the whole world. On La Palma the most popular would be the one to the Caldera de Taburiente. But, without doubt, the most spectacular one is the Volcano Route on La Palma. The path GR 131 is surprising, specially at the end of the trip with its extraordinary landscape. The south part of La Palma is full of volcanoes. And its mountain range conforms the Volano Route.

La Palma is a young island. On the north part we find the enormous crater of the Caldera de Taburiente. But mainly it is the south part with its only 500.000 years. The volcanic activity still have not ended in this part of the island. And the last eruption was only 49 years ago. To walk on the Volcano Route is a truly unique experience and show us the wilder side of La Palma.

The tour starts at the Refugio de Pilar, on about 1500 m. It´s a bout a green place with enormous pine trees and centenarian cedars. The path starts ascending and vegetation is getting less. The first viewing points offers a fantastic view to the Caldera de Taburiente. Very soon appear the rests of the volcano San Juan. Its eruption was in 1949 and the lava ran on the two sides of La Palma.

follows ascending until reaching nearly 2000 m. The Deseadas are two old volcanic cones, situated at the highest point of the route. From here the path starts to descend. And little by little we will reach the Voncao Martín. It was the day of San Juan 1646 when this volcano erupted. A beautiful crater with spectacular shades of red. The trail follows descending and goes through the pine forest of the south. After two hours you will reach Fuencaliente where a cold beer is wating for you in the Bar Parada. 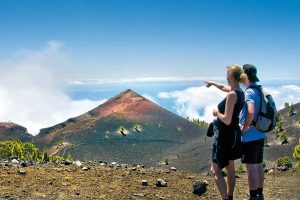 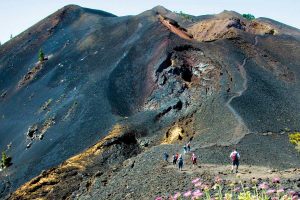 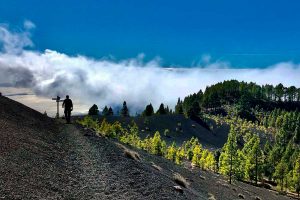 The Volcano Route is also possible to walk with full moon. This is an unforgettable experience for persons who do not go early to bed. After twillight the first stars will iluminate the way. Until the moon appears with its full light and permits to find the way without getting lost, but of course without the warmth of the day.